EVER GIVEN REFLOATED AND FREED!

The ship is no longer stuck, but it will take days to clear ships waiting to enter the canal. How the operation unfolded.

Salvage crews relied on powerful tugboats, large-capacity dredgers and high tides to pull the stranded container ship Ever Given from the banks of the Suez Canal on Monday.
Six days after wedging itself sideways into a single-lane section of the canal, the 220,000-ton ship was freed by around-the-clock digging and tugs that pushed and pulled it into the center of the waterway. 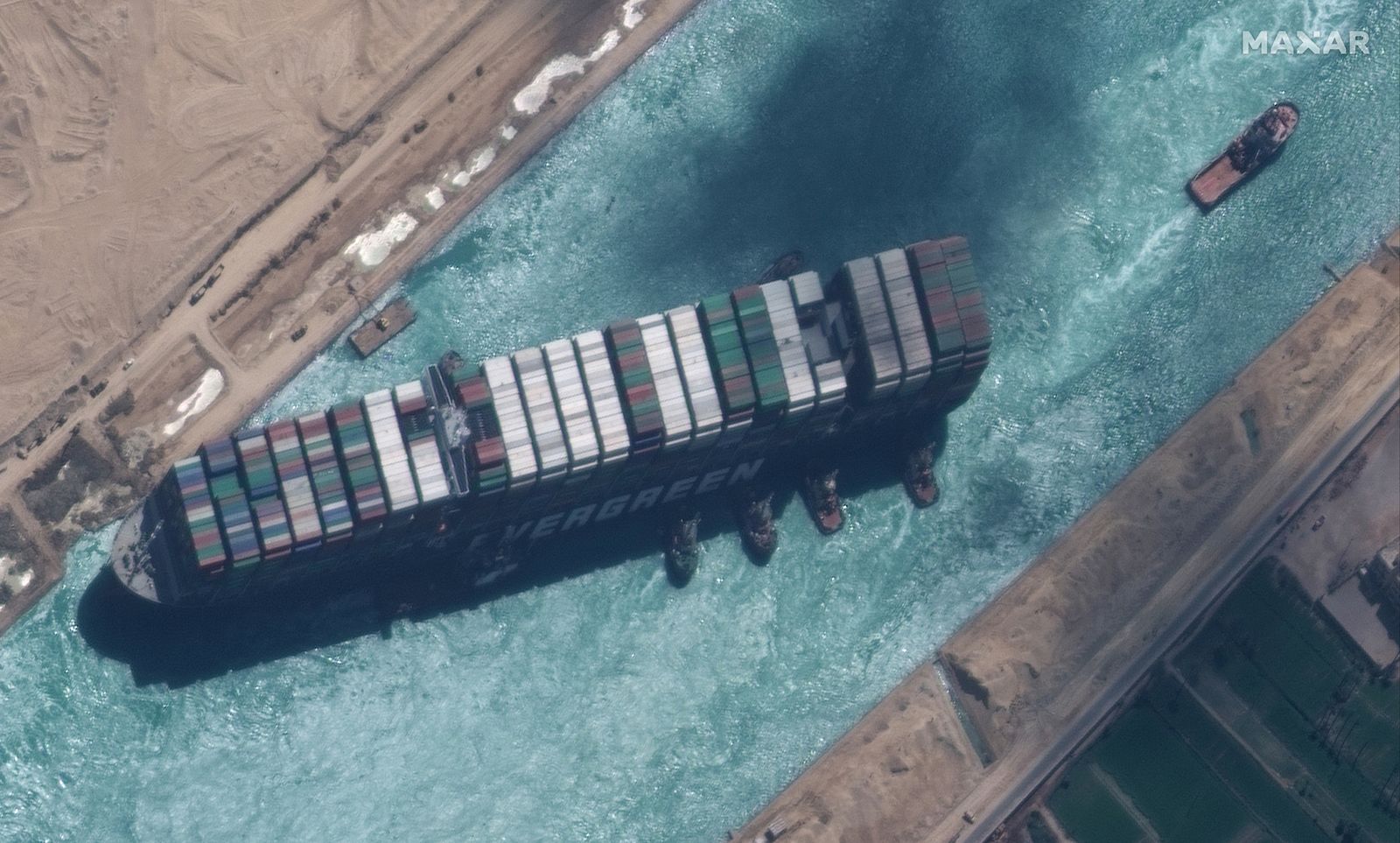 Workers removed 30,000 cubic meters of sand, enough to fill about a dozen Olympic-sized swimming pools, USA TODAY reported Monday.
The ship is as long as a skyscraper is tall. At 1,312 feet, it is comparable to the Empire State Building, which is 1,454 feet tall, including its spire and antenna. Here it is compared with Manhattan’s Central Park: 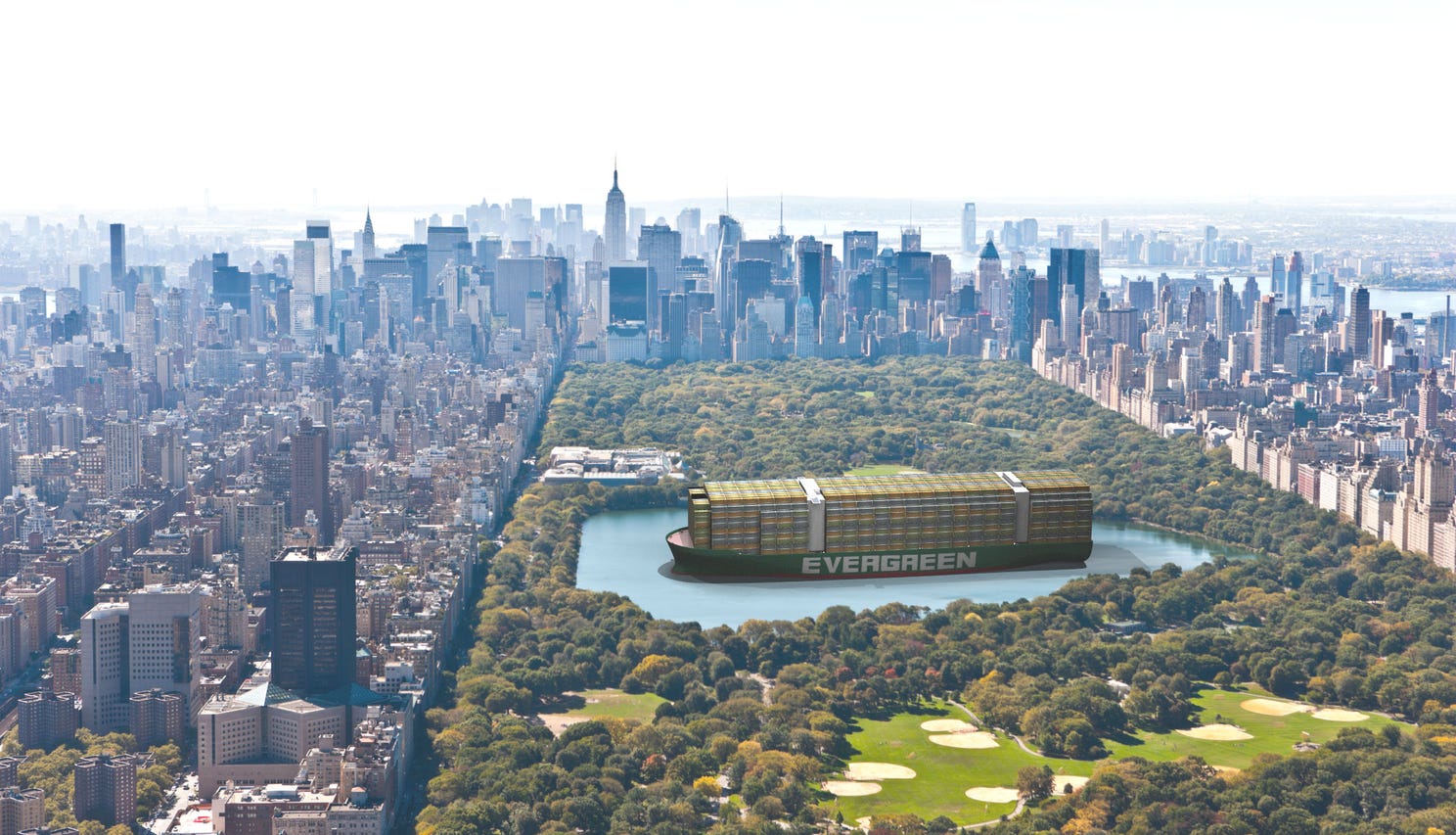 A composited 3D illustration shows how the Ever Given would look in Central Park.PHOTO ILLUSTRATION BY STEPHEN J. BEARD; GETTY IMAGE

The Suez Canal Authority said canal traffic would resume by evening. It’s not known how long it will take to clear the backlog of more than 300 ships waiting to enter the canal.
A canal official said it would take three days while data company Refinitiv estimated it could be 10 days or more.
The disruption costs the canal as much as $15 billion per day, according to Suez Canal Authority chairman Osama Rabie, the BBC reported.

How they got the ship out of the Suez Canal: 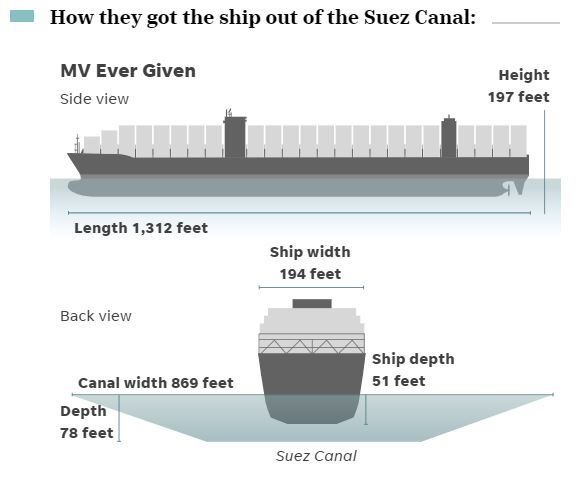 The ship’s stern was freed first Sunday, and the bow was removed from the canal bank Monday. The canal authority said the ship “came out intact and it has no problems.”
As conventional earthmoving equipment worked on shore, tugboats and dredgers were busy in the water. 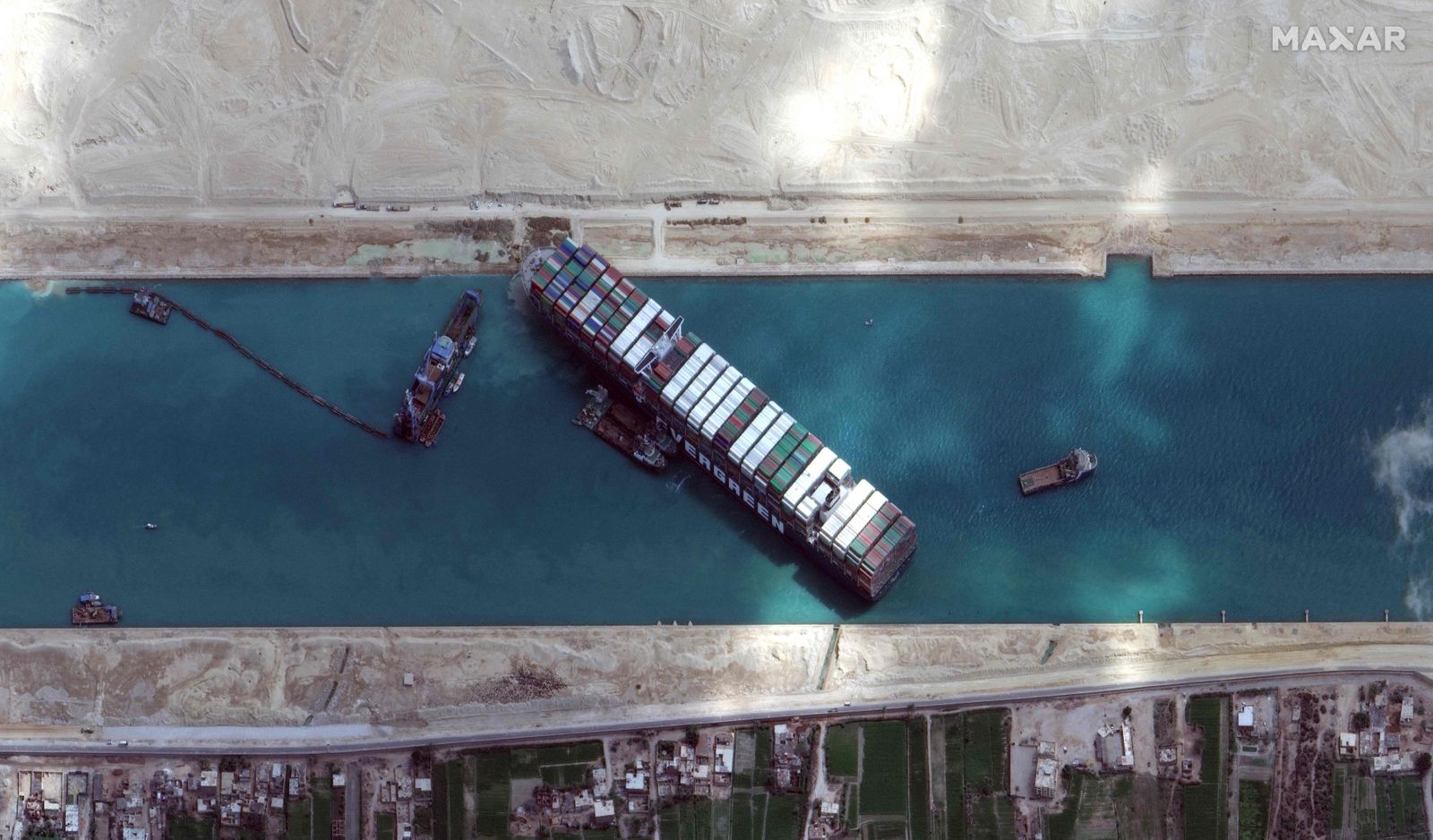 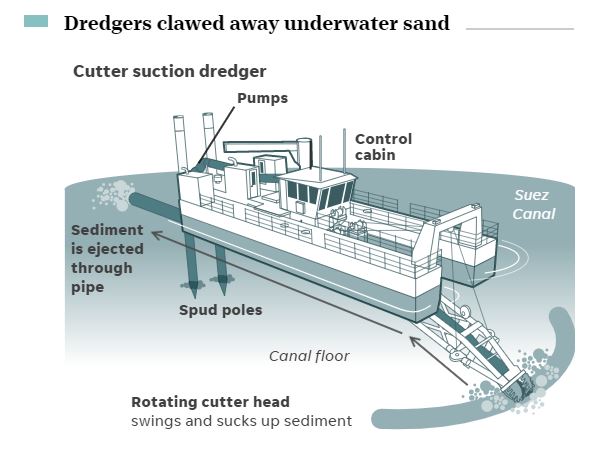 Dredgers are ships equipped with machines to remove underwater sand and sediment. Material can be lifted to the surface with bucket-like devices or vacuumed up by hydraulic pumps.

Two dredgers played an important role in refloating the container ship: the 10th of Ramadan and the Mashhour, both owned by the Suez Canal Authority.
The Mashhour is reported to be the largest and most powerful cutter suction dredger in the world. It was used to widen and deepen sections of the Suez Canal in previous operations.

Tugboats are powerful, specialized craft that essentially help ships “park” in ports and assist larger ships in moving in and out of berths. They can push or rotate ships by direct contact or pull them with heavy cables called tow lines.
Large ships, such as the Ever Given, have reinforced hull areas designed for tugboat pushing.
Tugboats are used in ports because large ships can’t precisely maneuver in tight spots at low speeds. They can guide ships safely through narrow passages.
About 14 tugboats of varying sizes were used to free the Ever Given, the BBC reported.
High tides made a critical difference in freeing the ship

Salvagers were aided by a full moon and high tides within the canal. The full moon offers spring tides, or king tides, which are higher and lower than average, The Associated Press reported.
Gravity has a greater effect on tides during the straight-line alignment of the Earth, the moon and the sun.
The spring high tides added a few inches of water inside the canal, making removal easier.
How many ships are waiting? Charlotte Cook, head trade analyst at VesselsValue, said there were more than 300 ships waiting in and around the Suez Canal. “This means that despite a successful operation to move the grounded vessel, we could still be looking at a possible five- to seven-day wait for the buildup to clear,” she said.

And there are even more ships on the way.
Data from VesselsValue shows 130 vessels en route to the canal, including 18 with an ETA on or before March 30, 26 vessels before March 31 and 44 arriving before April 1. 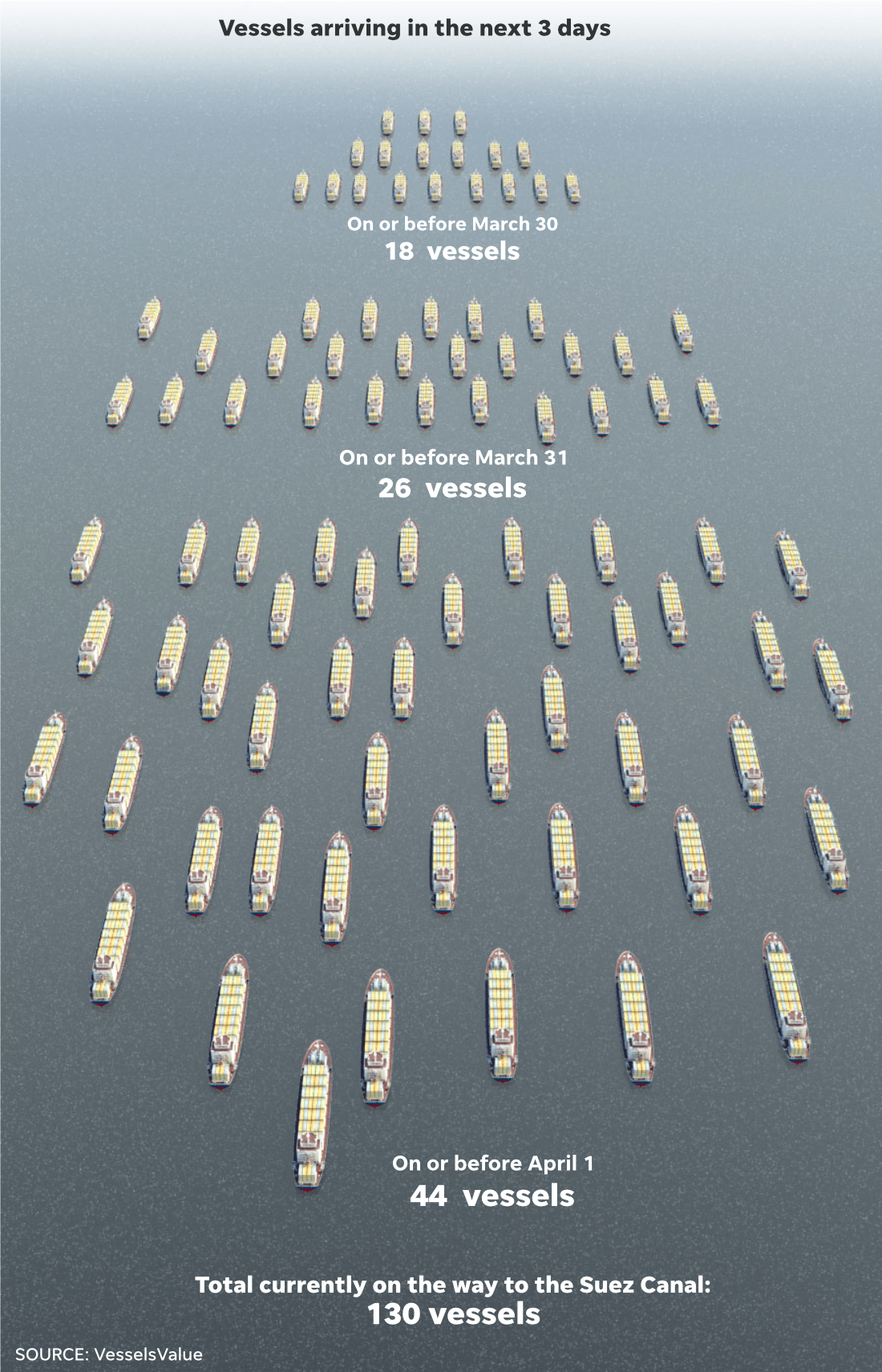